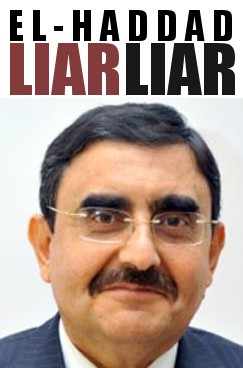 Essam el-Haddad, one of the Muslim Brotherhood top members and Mursi's assistant on foreign relations and international cooperation, wrote yesterday on his Facebook page the following:

It is important to note, after the wide circulation of news around attempts to limit free speech through the court system in Egypt, that neither the presidency nor the government pursued any legal action against the comedian, Bassem Yousef. The complaints issued against him, were mainly individual initiatives by independent lawyers. The Egyptian legal system as it stands, based on the old constitution, allows any citizen to file legal complaints against defamation. Moreover, the new legislative framework, as per the new constitution, does not include any articles that single out the president as immune from criticism, or even defamation. The elected parliament will take on the responsibility of issuing legislation based on the current constitution leading to a new legal framework that will support freedom of expression.

This is a very obvious lie. On two accounts:

As some of you may know, psychiatrist Dr. Manal Omar, who I wrote about here, along with TV host Mahmoud Saad are facing charges of insluting the president for what she said on TV. The presidency filed those complaints. Not individual initiatives by independent lawyers as Haddad claims in his statement to the western world.

Obviously, the western press loves Bassem Youssef and news of  charges against him were covered by almost every single paper and news outlet in the world. Even NMA.tv created an animation about it.

This isn't a statement for the outside world, this statement is almost directly addressing Ms. Victoria Nuland the US department of state spokesperson as she expressed her concern over "Egyptian Government efforts to restrict media freedom and criticism within Egypt, particularly by investigating media figures, including Bassem Youssef."

Second reason this is a very obvious lie is his claim that the new constitution will support freedom of expression. I will leave you with this quote from a Human Rights Watch statement on the constitution:

UPDATE Jan 6 14:48: I forgot to add that this isn't the first time el-Haddad tries to communicate something to the West in English and say something else in Arabic. Last month the Supreme Constitutional Court was angry that he described it as anti-revolutionary force. The court accused him of lying and said he was "undermine the reputation of this court internationally." His response was his statement was taken out of context and exaggerated.