Not only protesters are being teargassed and hit at by shotguns in their face on the outskirts of Tahrir square. They are being dragged, beatenand tortured on the streets. This is not new. What's new is that thiswas broadcasted live on TV tonight. This happened before during Mubarakand SCAF. But it's new for Morsi.

Why is this happening again? The answer is very simple. The police hasenjoyed total impunity over its actions for years. This hasn't changed.

Few policemen were tried and convicted for torture over the past years.Central Security Forces (CSF) were never held accountable for theirbrutality. Additionally, most of the court cases for killing theprotesters during the early days of the revolution were against policein police stations and not against the CSF units which were running around, shooting protesters with their shotguns from whatever range and in any direction they liked, shooting teargas canisters in the face andchest, and running over people with their armoured vehicles.

In fact, the top generals of the CSF were acquitted from charges ofkilling the protesters. Al-Adly and Mubarak received their sentencesbecause they failed to stop the violence on the day of protests but notfor responsibility over the killings. Who committed the killings? Thecourt said, "an unknown third party did." 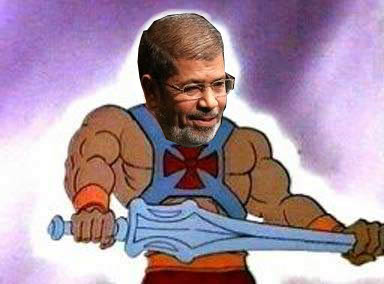 ::: I HAVE THE POWER!!! (Screen capture of He-Man videowith some rudimentary Gimping by yours truly):::

The prosecution at that time, headed by Abdel Meguid Mahmoud, himselfsacked by Morsi few days ago in his latest He-Manlike powergrab, asked the CSF for evidence against itself in the 'trialof the century' as the media called it. Abdel Meguid and Zend are nowtrying to head the judicial movement against Morsi's constitutionaldeclaration. Which is not bad, in that it may put pressure on Morsi tosober up a bit. They are not, however, going to call for reform of thepolice or anything from the kind.

Abdel Meguid doesn't care, or rather is actually complicit in so manytorture cases by closing theirfilesbefore and after the revolution. IANAL but I would argue that, if weapply the international legal definition oftorture,he would be sentenced to longer prison term than the perpetrators themselves. In so many incidents he knew very well that people were at risk or undergoing torture, and he didn't intervene. He didn't say aword during the year-long saga of trying civilians in military trials. Morsi claims he is achieving the revolution goals by giving himself unlimited powers. Yet, we are seeing more people getting injured and tortured. Morsi is claiming this will help him weed out the corruptjudiciary, yet the very machine that is killing the protesters and torturing them is untouched.