Torture and police, what now? UPDATE Wed. Dec 29, 2010:The Supreme Council for Antiquities announced today that building housing the Abbaseyya Psychiatric Hospital will be listed as an Islamic heritage site.

UPDATE Mon. Apr 18, 2010:
The designs changed on Zaha's website to include the hospital. Thanks to Luiz for the tip.

Opened in 1883, after a fire consumed a number of royal palaces except for one that was painted yellow and named the Yellow Palace (el-Saray el-Safra) it became Egypt's first modern hospital for the mentally ill.

Now it's in an area of 28 hectares and has around 3000 beds, offers almost all major psychiatric sub-specialities and an outpatient and emergency psychiatry services. The hospital serves around 60,000 patients each year.

In the 19th century, with the development of railway transportation, train accidents became a frequent source of death and serious injury.

Some of the victims claimed injury following an accident without a visible pathology. Jon Eric Erichsen, a British surgeon, in 1867 published a book called On Railway and Other Injuries of the Nervous System in it he argued that an unseen physical injury to the spine and brain caused the condition `railway spine.'

Railway spine was a concept that rooted the illness to the body and not the mind thus making it more legitimate and avoided stigma of mental illness.

Later, work by Jean-Martin Charcot, Piere Janet and Freud established the idea that overwhelming events can cause mental disorders.

Before WWI the terms “soldiers’heart,” “war neuroses” and “general nervous shock” were used to refer to the psychological casualties of combat. During WWI the term “shell shock” became widely accepted as it avoided the term hysteria. During World War II the U.S. military used the term “operational fatigue” or more often “combat fatigue.” 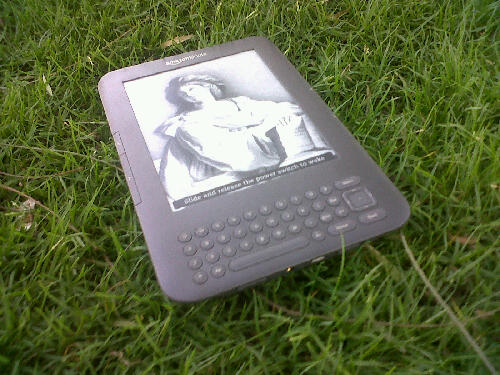 LCD screens on your flat-screen TV, laptop or phone are direct descendants of the cathode-ray tube TV. Difficult for prolonged reading. Although recently I read around 400 pages of a textbook on my laptop, I had to, it was difficult and wasn't an enjoyable experience. The last time I enjoyed reading a book on an electronic device was using the Palm PDA. I think the Amazon Kindle is a direct descendant of the Palm PDA, real paper and the Etch A Sketch combined. Perhaps other ereaders as well but the Kindle supports the palm doc format and it's more recent incarnation the .mobi format. I won't go into the technical specifics of the new Kindle but I want you to know how electronic paper works. The display is simply formed of tiny barrels each filled with black ink and a small sediment of titanium dioxide at the bottom. When an electric current passes through; the titanium dioxide particles rise to the top where you can see it as white pixels. The pixels, however, can't be seen unless you use a magnifying lens. It's wonderful, if you have a pdf with nice calligraphy you'd be happy just by looking at it.

The Kindle is slightly cheaper and has better Arabic support than all other ebook readers. Arabic PDFs of all kinds appear perfectly and the Webkit browser displays Arabic webpages. However, it doesn't show Arabic text files or mobi files. A 210 year old map of Cairo on Google Earth

Bibliotheca Alexandrina is hosting an interesting site called Memory of Modern Egypt which contains scans of photographs, documents and maps from 1800 till now.

Psychology at the Science Museum in London

The science museum in London has interesting items on display in the Psychology: Mind Your Head exhibit. Unfortunately, not all of them are on the website so here are some I photographed.

A skull showing phrenology markings with a device used to measure the features of a head for phrenological interpretation. Phrenology was a radical idea developed by Franz Joseph Gall in the 19th century. He said that different mental faculties like memory, sensation and instincts can be interpreted from the different features of a person's skull. It was against the religious thought at that time as the Catholic church refused the idea that the mind and it's faculties can be localized to physical structure i.e. the brain. Phrenology became very popular in Britain in the mid 19th century and it was used to compare the superiority of colonialists compared to the 'savages'. Now it's a pseudoscience.

The first world war introduced to psychology the idea that extreme stress could cause mental disorders. This was called war neurosis or shell shock. But before this realization it was considered cowardice and some soldiers in Britain were executed. Some of those who weren't executed were given an electrical shock in the back of the pharynx in an attempt to treat their hysterical behavior. Pictured above a Faradic battery that was used to apply the shock. Now the modern concept of shell shock is known as posttraumatic stress disorder.