``I know many Muslims," he said. ``I used to live in district six. When we were boys I went to play with the neighbourhood kids. Many of them were Muslims. One day when I was five, I found them going to a house standing in a line. I thought we will get sweets, you know. But each one was ordered to take down his pants. I was a kid and I thought I will get sweets. I did so. My mum few days later discovered some blood in my pants. She asked me what happened." he laughed and said "I was circumcised with other Muslim boys!" I asked him about his own kids. "I circumcised both my kids as well. They didn't like it in church, but I think it is clean." His name was Jason a taxi driver, a protestant and lives in Athlone since the forced removals. Athlone is a Cape Town suburb about 20 kms away from district six. 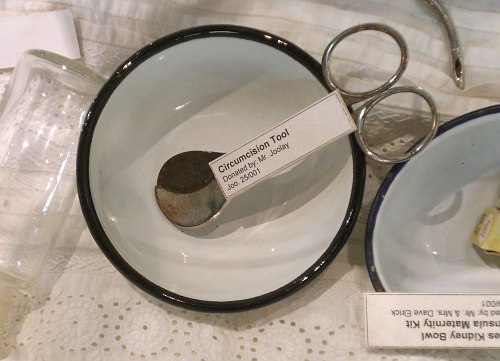 There are lots of Muslims in Cape Town. They are known as Cape Malays. Long street, the street that has all the bars and clubs and the only street that has people walking around till the morning on weekends, has four mosques! You can hear the Azan in some parts of town as well. Muslims can recite the Koran, but only phonetically they can't understand the Arabic. Muslims from the Cape win Saudi Quran recitation competitions. Probably to set themselves apart and identify each other, they insist on using Arabic greetings in their conversation. Like Shukran, Salamu'alekom, etc.. Cape Town international airport has a special terminal for pilgrim travellers. Almost all kinds of foods have Halal written on it, even yoghurt!

Cape Town Muslims are fond of democracy. Unlike many Muslims in the region spanning Pakistan to Morrocco, ideas like an Islamic government that uses the Quran as the source of laws doesn't work here. Indeed this is because of South African history. The myth that 'our own people are so dumb that if they get democracy they will fuck up their own country' doesn't not exist. Despite South Africa being a rainbow nation and each group considered the other as strangers. Such flawed concept is considered integral to the apartheid.

On my plane back home, I argued with a Pakistani ship captain going to Suez about this for an hour. He considered democracy will never work in Pakistan because "Pakistanis are idiots and that they will destroy their country with democracy." Islam is the way to go, he thinks. We were flying above Saudi. He was reading a book about Zulfikar Ali Bhutto.

To end the debate that was going no where I had to go to the toilet. Queued for 10 minutes, even though I didn't need it, I entered, locked the door, remembered the last seen from Palahniuk's Choke. Thought it was a stupid film. It was trying to be the Trainspotting of sex addiction.

It was even more stupid of me locking myself in there to end a debate. When I went back to my seat the topic changed to Somali sea pirates. We were flying above the Red Sea.

District six was opposite the place I first stayed in. It is basically an open space now covered in grass and very few remaining buildings. These where buildings owned by whites and the apartheid government didn't bring down places of worship. 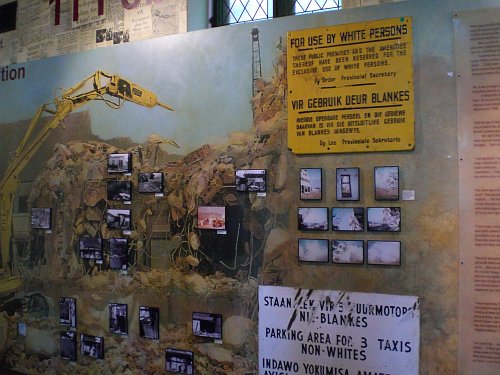 Charles Cilliers wrote in a book called 'For Whites Only' that the mosques and churches were left standing as if the people living there angered the gods and that these structures were left as a testament from heaven. It truly looks like that. To me its reminiscent of photos of the earthquake in Turkey few years ago. These photos were mass forwarded claiming that God turned the houses of the secularist pigs into rubble and only mosques stood.

Cilliers' book is written for white South Africans who ``still secretly, or not so secretly" think that black South Africans are inferior and not fit for running the country and ``to clean out the skeletons in their closet". I find it a very good introduction to people who know very little about the history and current politics of South Africa. I only had a very sketchy idea of what was going on there. The book feels like reading a very long blog post with lots of amusing rants.

District Six was the prime example of the forced removals practised during the apartheid era. It was very mixed racially and culturally. The reason for removal was that such mix was unwelcome (or even considered dangerous) and they wanted to develop the area for white people, since it was near town.

Cilliers says that its history revolved around this single human variable for hundreds of years. It is not astonishing that in 15 years things didn't change socially. People rarely hang out in the same places. And it is not only because of financial reasons. You rarely see the new middle class blacks mixing with whites. Probably only in work and in education.

It starts to become irritating and sickening after a while. At first you are curious about everything related to colour, but then when you start to overhear people continuously mentioning the words coloureds, whites, Afrikaans or blacks in their conversation. It becomes nauseating.

Some people seem to feed their latent racism (or rather fear from the other) with their fear of crime. A black man is always a suspect, is not only a bumper sticker, this seems to be imprinted in the heads of anyone who is not black. A black woman told me that she crosses to the other side of the road if she saw a coloured person walking in her direction on the side walk. Day or night. Another woman in the comfort of her car kept on pointing towards hooded black men and telling me that this is crime itself walking around freely.

At that point I wanted to throw up.

There are fantastic South Africans though, people who embraced the other even during the apartheid.

Listen, we are negrophobic here in Egypt. Most Egyptians are not exactly best friends with the black African man or woman.

Egyptians tend to consider Africans as lower human beings or khadam. Probably this roots back to slavery.

Hell, remember the Sudanese massacre? People still argue that it was the right thing. And we shoot refugees trying to cross the border to Israel in the most unlawful ways.

Last May, refugees across South Africa were subjected to widespread Xenophobic attacks. These were not the first of its kind. But this time it was much larger in size and claimed lots of victims. 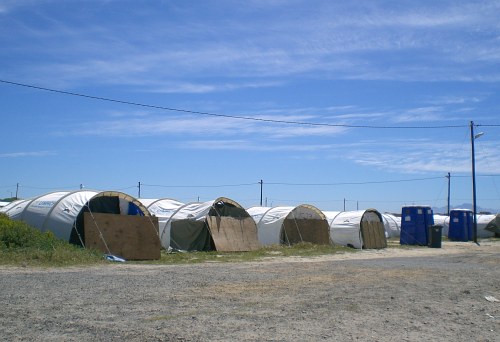 The victims were mainly foreigners. But only the black and the very vulnerable were attacked. Refugees from Democratic Republic of Congo, Somalia and Zimbabwe. Some of them established complete lives in South Africa for years.

According to a new book by Wits University called 'Go Home or Die Here' 62 were killed and thousand were made homeless in the attacks. One third of those killed were South Africans.

I went to South Africa to visit a centre called the Trauma Centre for Survivors of Violence and Torture. It is similar to the one I am working in here. On my first day we visited the Bluewaters refugee camp. The UNHCR and the government of South Africa installed the camps as a temporary shelter for 6 months. The xenophobic attacks were very vicious, people had to leave their homes.

'Go Home or Die Here' is written by academics, journalists and students and is trying to answer why those attacks happened in a country that currently considers itself a rainbow nation. They are also trying to understand why the attacks were directed toward the poor black foreigners and what does it mean to the current politics and history of South Africa. It also discusses issues about the country's self-representation, class, colour and citizenship. The book has lots of photos that show an alarming level of mass violence on the first days of attacks.

Marti Weddepohl is the director of the Bluewaters camp. Marti, a woman in her fifties, started as a volunteer in the camp was later appointed as a director by the UN.

When I asked her if she had any idea why those attacks might have happened. She said that the Somalis were subjected to similar attacks before. These attacks were not due to religion, there are lots of Muslims in South Africa and they were never attacked.

Coming from the middle east I had to explicitly ask if religion had to do anything with it. For me extreme nationalism didn't make sense either.

She says that Somalis are smart in trade, they easily network, manage to cut costs and can sell goods cheaper than the rest. The Somalis are more successful than South Africans. As a result they make a better living. South Africans say that they steal their women, but she says that in reality women goes to the richer.

The police moved the refugees into the camps to protect them from the attacks in the community. In Cape Town they were moved to Youngsfield, Harmony Park and Bluewaters. Youngsfield and Harmony Park were the first camps to close.

Two weeks ago, Bluewaters had 600 persons in it including women and children. The government wants to close the camp as the UNHCR will not resettle the refugees and they only have two options. Either to stay in South Africa or return to their original countries. But in many cases repatriation is not possible to countries that are deemed unsafe by the UN. Namely DRC and Somalia. Zimbabwe, despite the famine, cholera epidemic, lack of schools or health care is not considered unsafe.

Many of the refugees I met are willing to take the risk of going back home despite the unrest in their countries than going back to their communities in South Africa.

The camps were closed a few days ago. As far as I know the tents were supposed to be brought down.

There seems to be no solution to this Xenophobic situation. In November 2008, 6000 new refugees entered South Africa running away from the war in DRC.

Egyptians do connect with the rest of Africa but only in football. I really wished I was a fan. People in South Africa know everything about Egyptian football players. Old and new. You can even buy an Ahly jersey from street shops.

Football seems to be the sport of black people. Rugby brings all colours together yet teams are predominantly white. I really hope that Egypt will make it 2010 and that the world cup, despite its financial burden on South Africa, will bring down any psychological barriers still there between the people of this wonderful country.