Rough English transcript written while the debate was live can be found here:

Please note that this was typed while the debate was being aired live on TV so there are bits missing and possible inaccuracies. Also lots of spelling and grammatical mistakes.

The video of the debate itself can be found here.

The man in white hair who looks like Jor-El and appears in the projected screen, just like in Superman II, is called Timothy Trujillo and he is someone who is "a Mind-Body Healing Specialist with certificates in Acupuncture, Hypnotherapy, Reiki, and Reflexology."

Reiki, Reflexology and Acupuncture are types of complementary and alternative medicines (CAM) that have no solid empirical evidence to back them. Their practitioners claim that certain power fields exist and that these therapies modify such fields. But these fields can't be measured and don't make much sense giving our current knowledge of biology and physics. Although there are papers that claim they do have an effect, very often these studies are flawed or the effect is due to the placebo effect. (I won't explain the placebo effect here, look it up, it's very interesting)

I may be biased against CAM but lets examine the evidence quickly for the sake of this blog post.

Practitioners of CAM usually resist any criticism of their methods and are unwilling to provide evidence for its effectiveness by conducting proper studies. Often the sensationalism, the grand claims by CAM practitioners and perhaps giving the patient more attention and time are the main reasons that draw the public to it.

Hypnosis is a form of an induced trance state where the subject is suggestible and relaxed. It is a real phenomenon and may have some effect but has very limited applications, not easy and doesn't work with everyone. The public perceive hypnosis as something magical or intriguing possibly due to the practice of stage hypnosis which is pure deception.

I took part in a training workshop for the medico-legal authority (forensic authority) in December in Cairo and last month in Assiut.

My part in the training was on the psychological consequences of torture. This was part of a training on the Istanbul Protocol, an internationally recognised guideline for medical and legal documentation of cases of torture. The IRCT managed to convince the director of the authority (chief forensic examiner) Dr. Ehsan Gorgy to provide such training, in exchange the authority will get them several digital cameras to help improve their documentation.

The authority was established in 1931 and is part of the Justice Ministry. It works within the legal framework of laws passed in 1952. A year before the structure of DNA was discovered and before many of the current advances in radiology and other fields of medicine. Currently the authority has an office in every governerate and a workforce of about 70+ doctors.

The authority was under intense scrutiny by the public following the Khaled Said case. It was accused of being complicit with the regime. This case is still a sore issue for forensic doctors and the public still carry lots of mistrust.

While exchanging contacts with one of the doctors at the end of a training day. One told me he has a Facebook account and is quite active on it but no longer writes his occupation as a forensic doctor fearing insults and shaming from his Facebook friends.

Substance abuse among health professionals is serious. An impaired physician may harm the lives of her patients or may lead to their own death as in the case of Dr. Karim Aly. Compared to the general public, physicians have access to very serious medications. More so in certain specialties like anesthesiology.

Open Democracy: Best of the blogs openDemocracy, a wesbite that publishes posts by prominent academics and journalists and encourages debate about world politics and culture, has published as part of its Arab Awakening section a guide to the best blogs in the Arab world for 2011. These include very important and popular blogs such as Nawaat, Jadaliyya, Mamfakinch and the Arabist.

Nawaat was this time last year an incredibly important resource, not just for Tunisians but for everyone who wanted to follow the events that led up to the downfall of Ben Ali. The other three blogs are so well established that they don't need any introductions. Check out their guide here.

Additionally, the site chose less well known blogs. Like Basem Sabry's highly thoughtful blog and it introduced me to Abu Kareem's Levantine Dreamhouse which I am looking forward to reading more of his posts on Syria. His spot on post about the Arab League observers mission to Syria being a farce caught my attention.

.@alaa released and live tweets of his latest TV interview 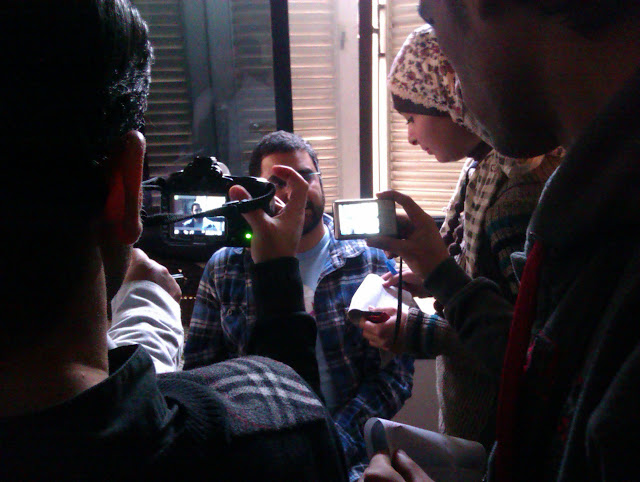 On the tear gas