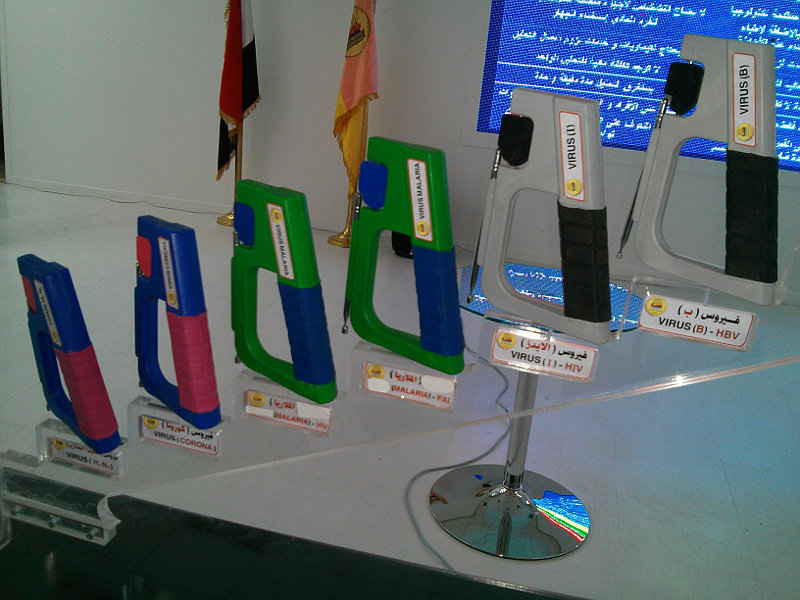 Egyptian Army Engineering Authority (EA) is organising a press conference tomorrow at the Qubba Military Hospital at 10:00am. According to Youm7 and Watan they will announce new information about 'their successes in the treatment of HIV/AIDS and Hepatitis C' using their newly invented devices.

It is important to remember that there are two devices in the whole #koftagate story:

A: The diagnostic devices: (Fast series) Including C-Fast that allegedly diagnoses Hepatitis C. This is the device with an antenna sticking out of it. According to their claim it can detect the virus from a distance up to 500 meters, works with static electricity and has not electronics inside it.

Only one paper was published in a low quality peer-reviewed journal. Few days ago the journal was the subject of a sting operation by Egypt Independent and it accepted a plagiarised article that made no sense in less than 24 hours, this is a sign that this journal does no peer review.

The device is made of a plastic handle and an antenna sticking out of a hinge. This hinge is unstable and can move in any which way if, while holding it, you move your hands. This device is GUARANTEED TO FAIL to work if the user closes his eyes. This is because the antenna move using a psychological trick where the user's thoughts affect his hand movement. Minor hand movements move the device very slightly and imperceptibly these movement are translated by the unstable hinge system. This is called the Ideomotor effect and is the same way Ouija boards work. Basically this is a CHEAP MAGIC TRICK.

The device is very similar to the ineffective bomb detector used in Iraq ADE651 that turned out to be a huge scandal. The business man who sold this device to Iraq (James McCormick) is now serving jail time for fraud in the UK. Whilst Prime Minister Nouri el-Malaki insists that some bomb detectors work he admits that the device is less effective than trained dogs.

The Egyptian medical and scientific community didn't denounce this device strongly because of the aforementioned paper. This is dangerous because several of members of the engineering authority and the HEALTH MINISTER mentioned it can be used in separating infected blood from viable blood in blood banks.

B: The treatment device looks like a dialysis machine. The claim is that blood goes in then comes out free of viruses. The EA claims that it kills the virus by using electromagnetic signals.

The lead inventor of this machine Maj. General Ibrahim Abdel-Atti is an interesting personality. He claims to have invented a new domain of medicine called Cosmic Medicine and that he is 20 years ahead of the rest of the world. He is an honorary army general and used to sell herbal medicine in the gulf and received a degree in biochemistry from Sri Lanka. Abdel-Atti gave the kofta name to this scandal by his comments about taking the virus into the machine and returning it kofta for the patient to nourish him.

The most important point is that no controlled trials where published to test this machine. They refuse to do so claiming that it this device is a national secret. If this device enters into use, the EA will be exposing patients with serious conditions to untested and unproved treatment that didn't pass proper scientific procedures that clear treatments for wider use and may potentially harm them.

C: According to several news sources few months ago Sisi asked a scientific committee to review the devices. This committee doesn't seem to be entirely independent but is nevertheless a good step. No report was made public until this point.[6]

The Engineering Authority claimed several weeks ago that it will demonstrate the device to international and local scientists and doctors by mid-June. Nothing happened.

Videos are incredibly detailed and thorough in debunking EA claims

Islam is a highly published and experienced virologist working at the MIT and is willing to respond to any of your questions ihus@mit.edu