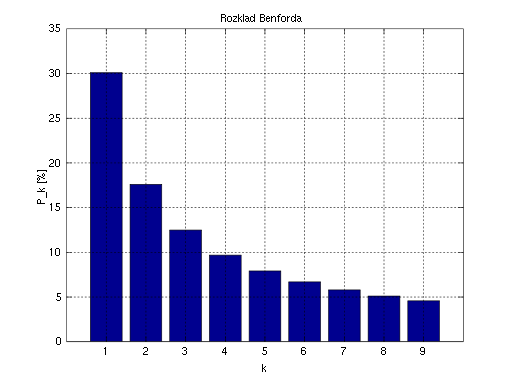 This can be used to detect if numbers have been manipulated. This is commonly used in detecting financial fraud and sometimes election data.

The Judges from Egypt* group published a detailed count of the presidential elections runoffs between Ahmed Shafik and Mohamed Morsi. The data is of 350 main electoral stations, which provides sufficient granularity to examine the phenomenon described.

Plotted in the graph below is the rate for Morsi, Shafik, invalidated ballots and the ideal Benford rate. 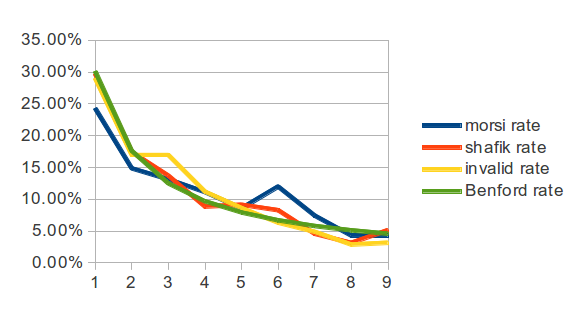 You can see that there isn't much deviation and the numbers follow Benford's law (green line). In Morsi's first digit the number 6 and 7 are more frequent than expected. I used the chi square test and it wasn't a significant difference (p=0.99).

Although article 28 of the constitutional declaration means that whatever result published by the Presidential Election Committee is final. If the data is published in sufficient detail we can compare the numbers to what have been collected so far and see if the final numbers were manipulated.

* The Judges from Egypt group claims to be a group of judges who monitored the elections independently of the state and published their own results. It's not clear how they did so as they haven't published a report about their observations. Their numbers are identical to what the Freedom and Justice party(FJP) has published except for 4 governerates and the differences are trivial. The FJP published 350 copies of official reports by main electoral stations.

UPDATE: Morsi won. The difference between the numbers published but the MB and the official results was tiny. More on the MB vote count operation by Zeynep Tufekci.