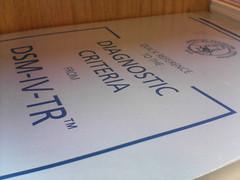 Published in the latest(April 2008) issue of Psychiatric Times an article about proposed new diagnostic guidelines for bipolar disorder by the International Society of Bipolar Disorder.

"Some researchers claim that schizoaffective disorder is consistent with the idea that there is no distinction to be made between schizophrenia and mood disorders, but the committee didn't agree with that," Ghaemi said.

Most of the evidence, he explained, suggests that schizoaffective disorder does not represent a separate categorical disease entity; rather, it is "a variation on schizophrenia or a variation on mood disorder or co-occurrence of the two."

The subgroup recommended dropping the schizoaffective disorder diagnostic category altogether from DSM-V and replacing it with additional specifiers for chronic psychosis in mood disorders and new specifiers for mood episodes in schizophrenia.

"The task force wanted to state that children do have straightforward mania according to the DSM-IV current adult definition and that this definition, at the very least, should be used," Ghaemi said.

In its recommended revision to DSM-IV, the subgroup described pediatric bipolar disorder as follows: (A) presence of acute manic, mixed, or hypomanic plus depressed episodes before age 18; and (B) the definition of the acute manic or hypomanic or mixed episode meets adult criteria. If only irritable mood is present, and not euphoria, then documented spontaneously episodic fluctuations in the presence or absence of symptoms of mania are required for the diagnosis of an acute manic, hypomanic, or mixed episode.

Mixed states According to Ghaemi, the mixed states subgroup turned out to have the most difficult job overall.

There was agreement in the subgroup that the current system of definition of mixed states is inadequate, but there was not sufficient agreement to recommend an adequate replacement, Ghaemi said. The subgroup's attempts to broaden the narrow DSM-IV definition of mixed manic-depressive states to include depressive mixed state and dysphoric mania were met with rejection by the peer reviewers.

The peer reviewers' lack of approval of the subgroup's article is indicative of the existence of differences in concepts concerning the nature of mixed states, said Ghaemi.

Read the article in full.