On October 2008, in Samalut, Menya, few hundred kilometres from Cairo, a pregnant 36 years old woman was woken up, terrified, early in the morning along with her husband and their 8 years old son, by 5 police officers looking for her brother-in-law. Mervat was kicked by police officer Ahmed Anwar in her stomach, she fell and in 10 minutes she died. Her 8 years old son, Sayyed, witnessed the assault and the death of his mother in their own home by a group of strange men who call themselves Mabaheth.

In their village, news of the incident spread quickly and on the same morning she died, riots erupted. Two police officers were injured and a police car was damaged. 18 people were arrested after the riots. 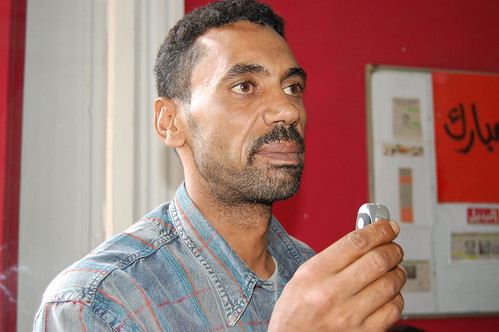 Mervats' death was no accident, pregnant women don't die from falling and so I assume that the kick was pretty damn hard. However, her assailant, police officer Ahmed Anwar, received a sentence of 1 year in prison last April. Her brother-in-law, who was convicted of hiding stolen goods was cleared of his charges days after she was killed. The Human Rights lawyer involved in the case said that the presence of police inside her house was illegal and the police tried with the prosecution to cover this up.

This horrible story was reported in several independent newspapers. I am not sure about international media. But it was never as spectacular as Marwa el-Shirbini's death in Germany few days ago. Marwa was also a pregnant Egyptian mother and her son witnessed her death. Mervat, however, was never called a martyr. Mervat's death is not an isolated incident. Every couple of months we know of a death by the hands of our police, with great impunity by the ministry of interior, prosecution and judiciary. Let alone torture which happens daily.

I am in no way saying that Marwa's death is an ordinary incident, it is very sad. But I hope that the media and people would be more rational and see what causes more direct suffering and start making some really big noise, a media and public opinion big bang, about torture and impunity in Egypt. Its one thing that people should put to an end.