The science museum in London has interesting items on display in the Psychology: Mind Your Head exhibit. Unfortunately, not all of them are on the website so here are some I photographed. 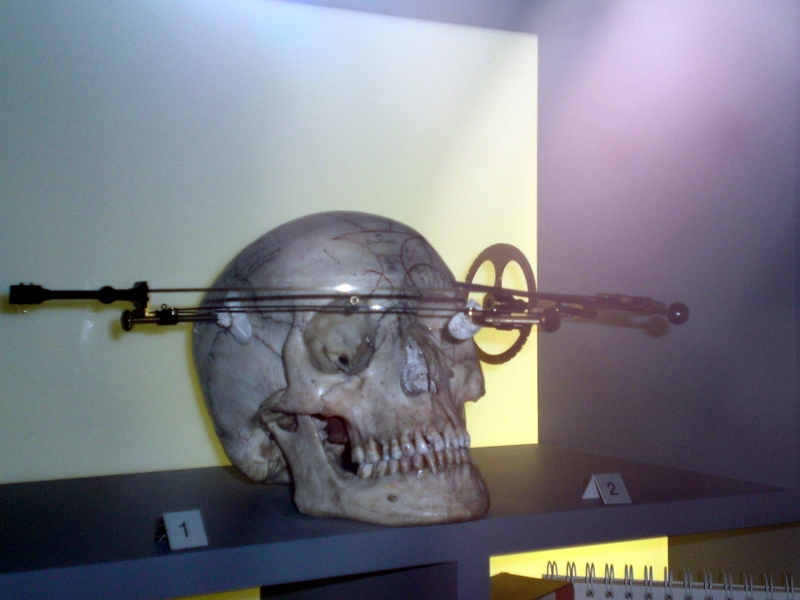 A skull showing phrenology markings with a device used to measure the features of a head for phrenological interpretation. Phrenology was a radical idea developed by Franz Joseph Gall in the 19th century. He said that different mental faculties like memory, sensation and instincts can be interpreted from the different features of a person's skull. It was against the religious thought at that time as the Catholic church refused the idea that the mind and it's faculties can be localized to physical structure i.e. the brain. Phrenology became very popular in Britain in the mid 19th century and it was used to compare the superiority of colonialists compared to the 'savages'. Now it's a pseudoscience. 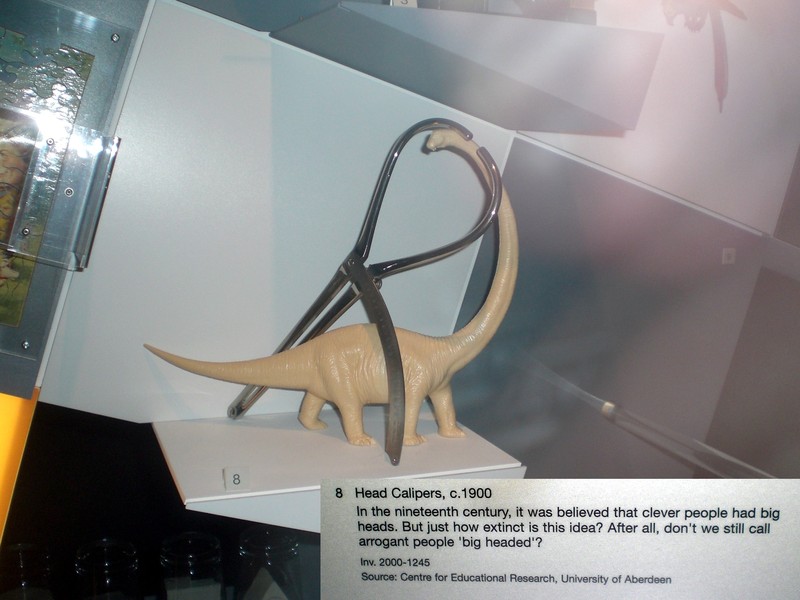 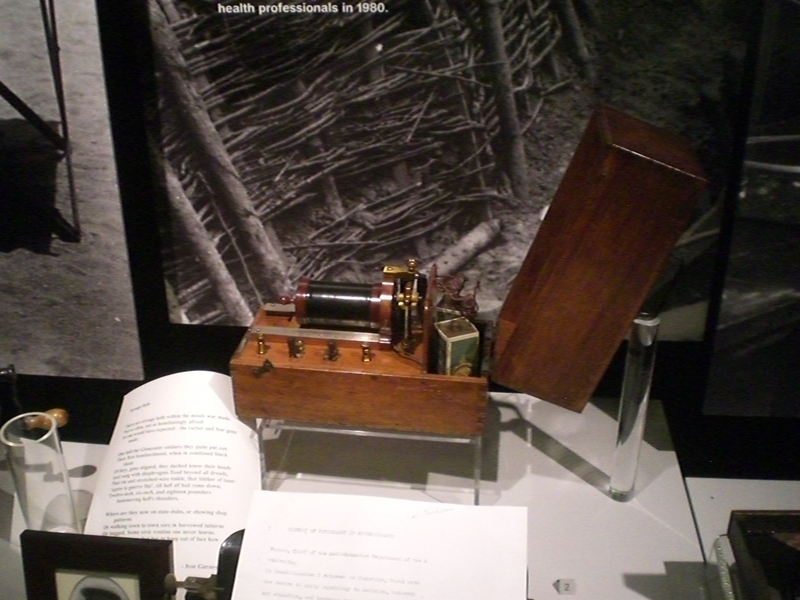 The first world war introduced to psychology the idea that extreme stress could cause mental disorders. This was called war neurosis or shell shock. But before this realization it was considered cowardice and some soldiers in Britain were executed. Some of those who weren't executed were given an electrical shock in the back of the pharynx in an attempt to treat their hysterical behavior. Pictured above a Faradic battery that was used to apply the shock. Now the modern concept of shell shock is known as posttraumatic stress disorder. 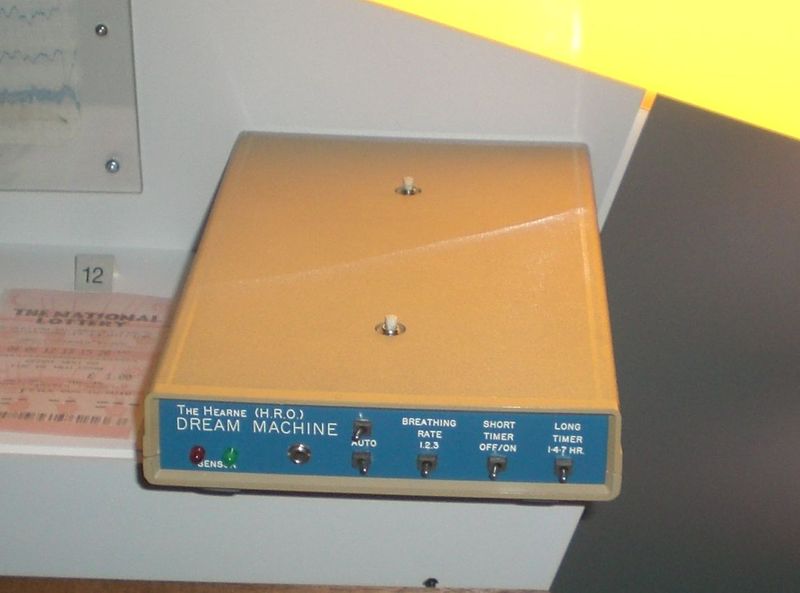 This is an interesting device that I didn't know it existed. This is a 'dream machine' invented by Keith Hearne to increase a person's ability to experience a lucid dream by stimulating the median nerve and can also wake a person in the REM stage of sleep by an auditory stimulus. It detects the REM stage of sleep from the pattern of breathing. Read more about it here. 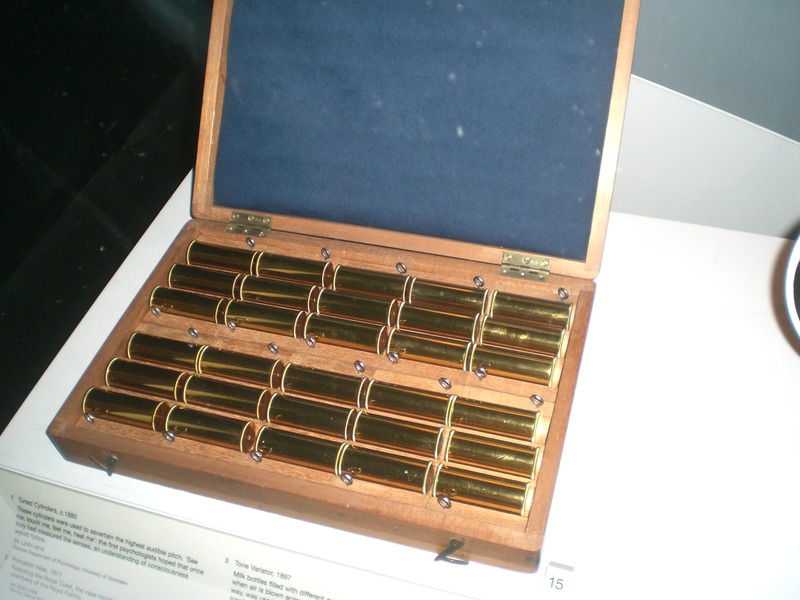 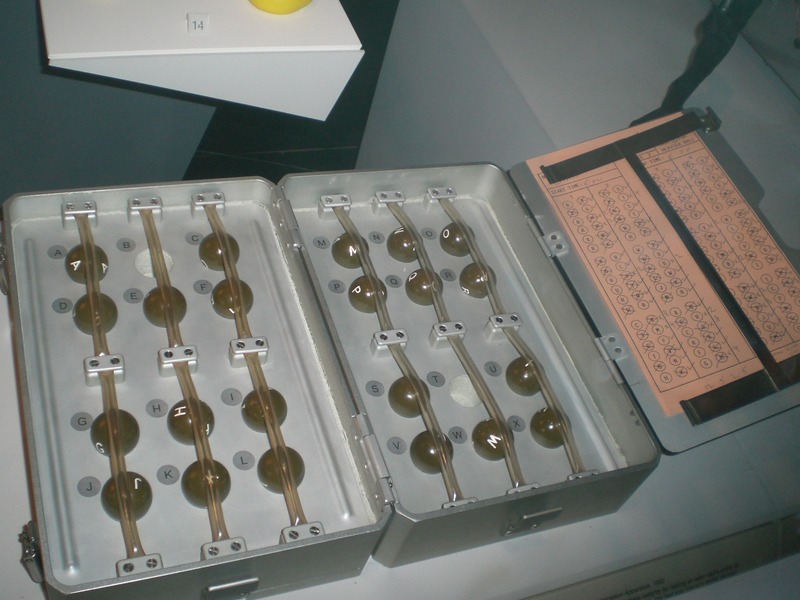 Above are two very similar devices created 90 years apart. The first one was created by Francis Galton in 1893 to test the person's ability to discriminate minor differences in weight. All the cylinders are the exact size but with different weight. Galton is one of the first psychologists to introduce quantitative methods to psychology. A relative of Darwin, he is known for his work on measuring intelligence, correlation and eugenics. Although I couldn't find out if Galton did anything special with this box, it says that it was related to his work in his Anthropometric lab. His contemporaries at that time were Weber and Fechner and they described a constant between the minimum amount of change in the strength of stimulus and the change detectable. In other words, if you are given a cylinder and then another one after it, you will detect a difference in weight between them based on the weight of the first one. So lets say you where given a light cylinder and then another that is slightly heavier and you managed to find that there is a just-noticeable difference between them(x). If we try again and the starting weight is doubled the next cylinder to be sensed as heavy will have to be double the difference (2x).

The second device was created by Helen Ross from the university of Stirling in Scotland. It's the exact same idea but for use in space. There is no weight in space since there is no gravity but things still have mass and objects with a higher mass gain more inertia and so they need more force to stop moving. This device was used in 1983 in the first Spacelab mission to compare between mass detection on Earth and in space. Ross found that the ability to discriminate the mass of objects under weightless conditions is poorer and that the just-noticeable difference rose by a factor of 1.8. 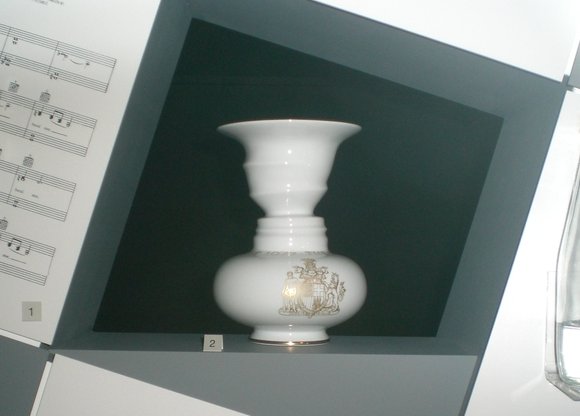 A Rubin vase showing the portraits of two members of the royal family. A demonstration of figure-ground perception. 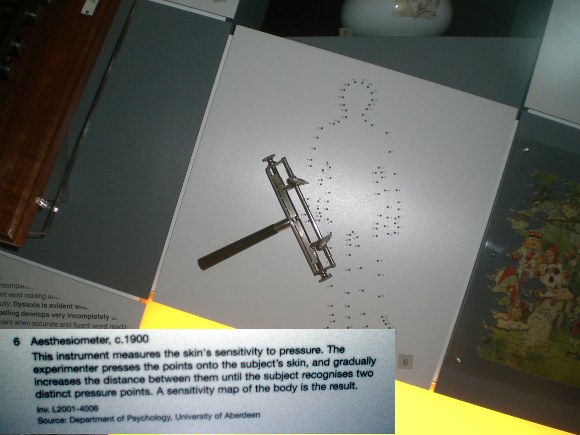 An early aesthesiometer. The tips of fingers, lips and nipples have the best two-point discrimination. Similar devices are still sold and used to monitor neurological changes in diabetics. 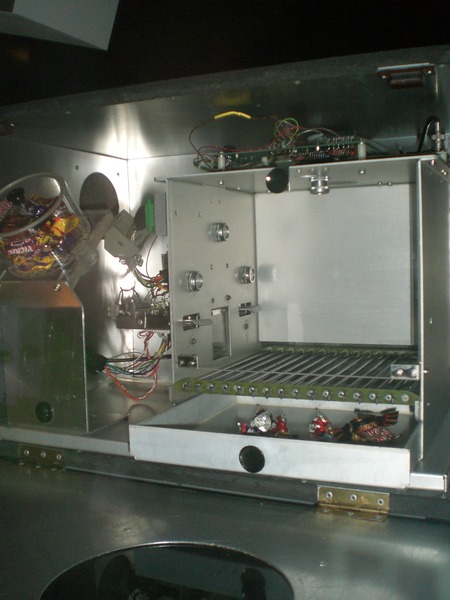 A Skinner's box for rats. Created by B. F. Skinner in the 30s for the study of learning. He used it to study operant conditioning. I found a cute video on youtube showing it in action: 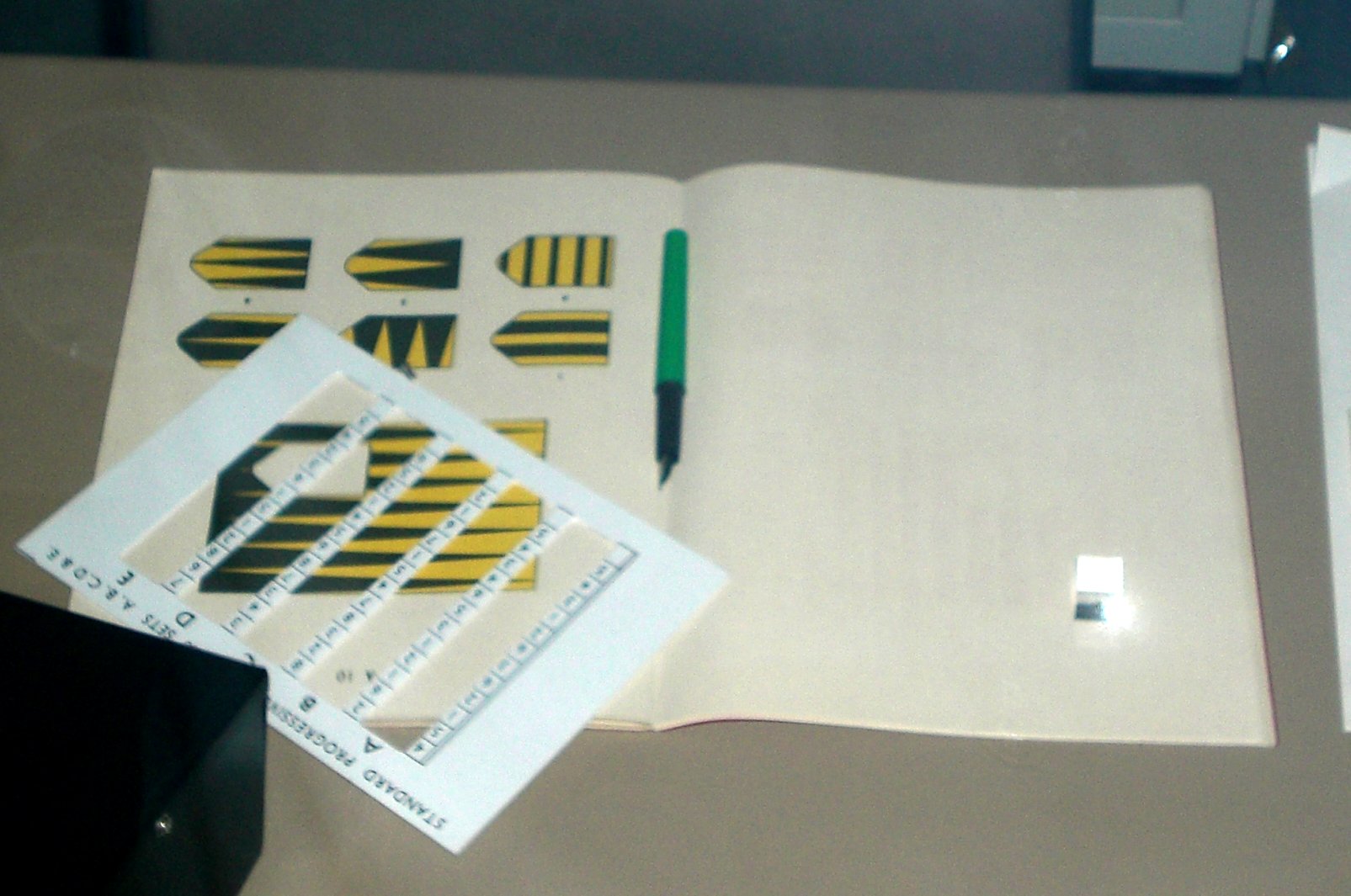 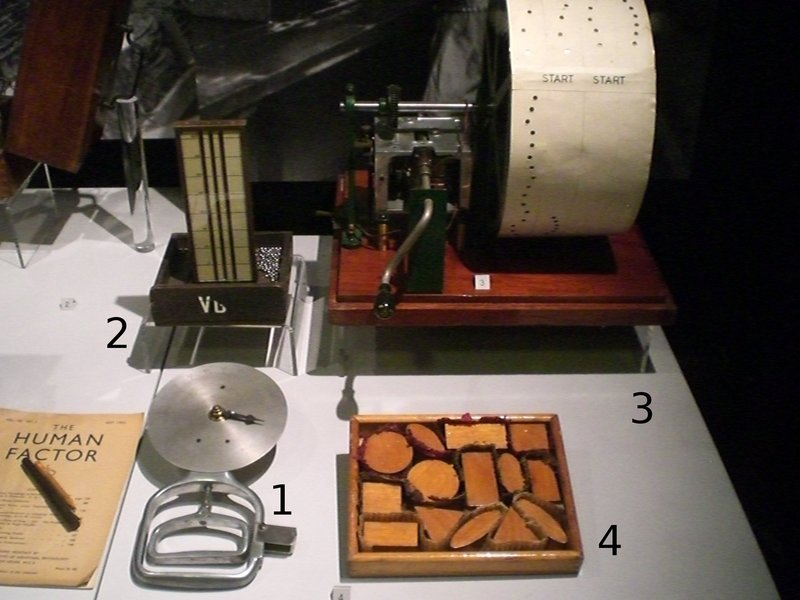 A collection of occupational psychology instruments. 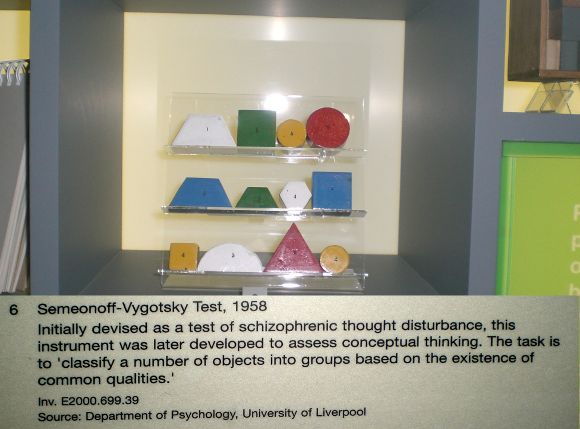 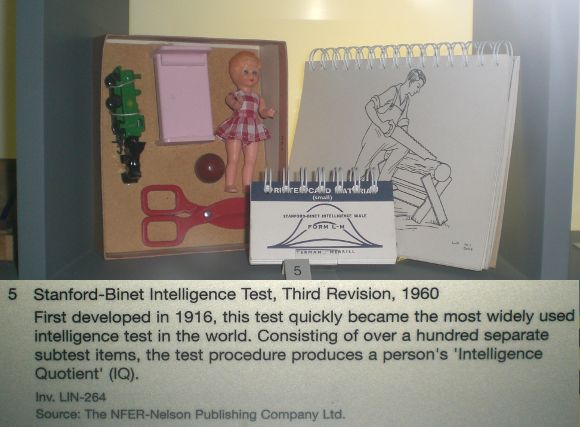 Stanford-Binet test is still one of the widely used intelligence tests. 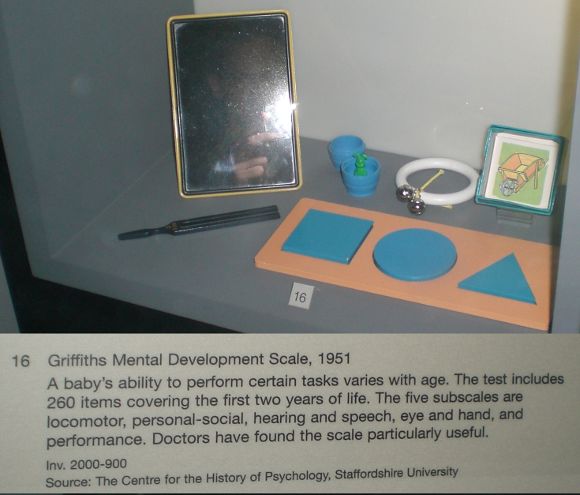 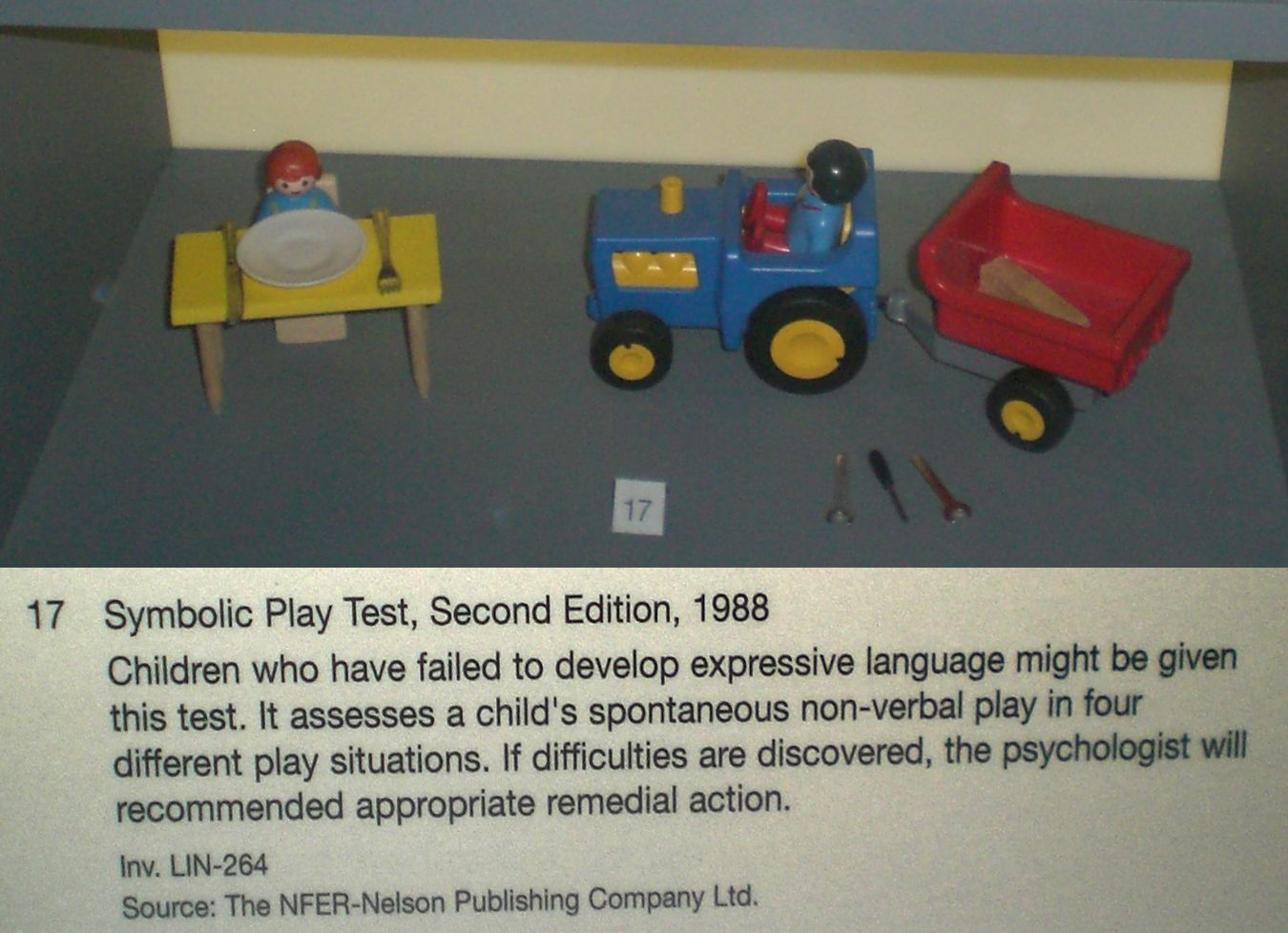 Symbolic play develops after the age of two and is a strong predictor of language development.