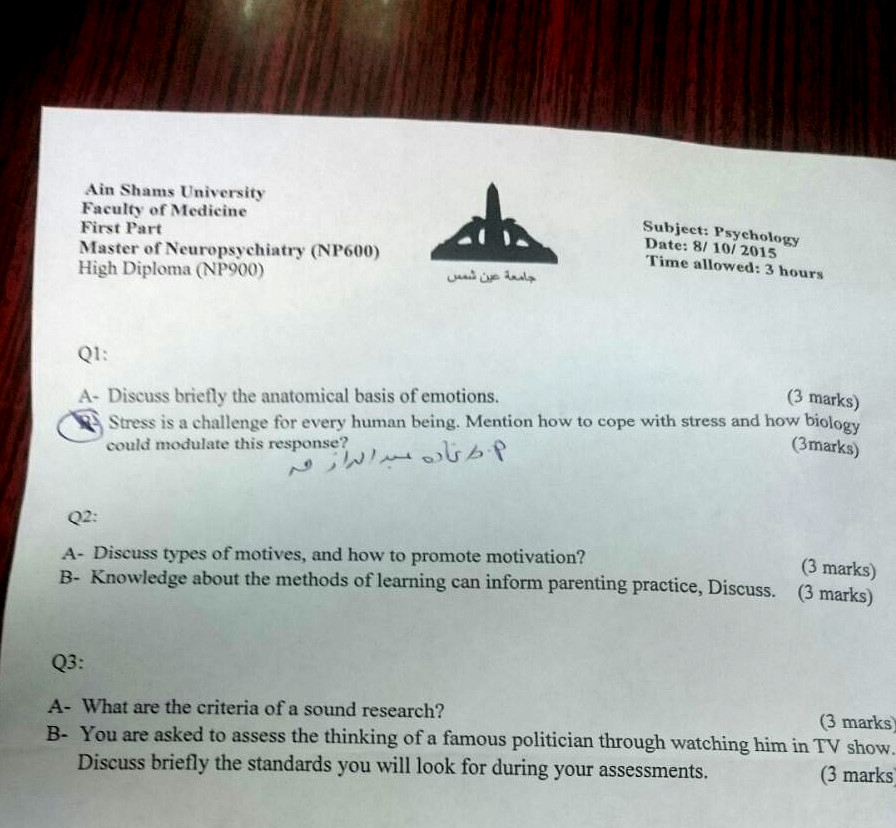 Today, I received a copy of the psychology exam for the masters in neurology and psychiatry at Ain Shams university. The students were given this brief essay question "You are asked to assess the thinking of a famous politician through watching him in TV show. Discuss briefly the standards you will look for during your assessments." (see photo above Q3.B)

My gosh! This comes almost a week after I wrote an article explaining why psychiatrists shouldn't comment on the mental state or diagnose politicians from a distance. Why are they asking students to imagine being requested to do something that is clearly unethical? What standards are they talking about? When there are clear standards against doing so.

The American Psychiatric Association has an ethical principle known as the Goldwater rule. In 1964, a political magazine in the US asked 12,000 psychiatrists for their opinion regarding the presidential candidate Barry Goldwater's fitness to be President of the US. None of them examined Goldwater and none had permission from him to issue public comments. Goldwater sued the magazine for libel and won.

Following that the APA added this to its ethical principles (section 7.3):

"On occasion psychiatrists are asked for an opinion about an individual who is in the light of public attention or who has disclosed information about himself/herself through public media. In such circumstances, a psychiatrist may share with the public his or her expertise about psychiatric issues in general. However, it is unethical for a psychiatrist to offer a professional opinion unless he or she has conducted an examination and has been granted proper authorization for such a statement."

This was done to "to protect public figures from psychiatric speculation that harms the reputation of the profession and of the unsuspecting public figure."

Similarly, Dr. Manal Omar was subject to libel lawsuit by the presidency following her comments on Mohammed Morsi during his presidency. After public pressure the suit was dropped.

Another important principle is the philosophical principle of charity. Which means that when we try to understand someone's statement or point of view we try to understand the most powerful explanation and in a way that makes most sense. TV isn't the best medium for this. In my opinion that's one of the essences that differentiates a clinical interview from TV because you will then be able to ask more questions to understand what the person really means and not create a false understanding based on the one-way medium. For example, if someone says on TV that he believes he is being spied upon it is false to conclude that he is suffering from delusions of persecution because only in an interview that you will be able to question this further to understand how he or she reached this conclusion and the degree of conviction. It can be that he is truly being spied upon by some government because he received threats or that he found this information written on the seed of a mango fruit.

Actually it's perfectly fine for psychiatrists to have political views and to express them in public. If it wasn't clear from my article, my objection is on the use of psychiatric terminology to describe particular politicians or political groups. In fact the ethical rules of the Egyptian Psychiatric association, which Dr. Ahmed Okasha is its head, states that "If a psychiatrist has private views on general issues (politically or otherwise) he should clarify in what capacity he is speaking. And in this case he is like all other citizens without a professional title or specialisation." This is point number 8 in 10 points about psychiatrists and the media. Essentially, psychiatrists should be very careful when speaking to the media.