I wrote an account on my trip to Sudan on 18th of March 2004, I didn't have this blog to post it to. So I emailed it to everyone I knew. I guess it is worth putting here. Since this post is very long, I tried to add as much photos as I can to make the post more appealing. Note that some photos have hotspots that are annotated. I also added an interactive google map with placeholders for places I have been to, but I don't know why only one placeholder is appearing. Sorry about that, I will try to fix it soon. This page is very large, apologies to dial-up users.

UPDATE It seems a bug from google so I am removing the map.

Some of you may noticed that I disappeared for a while. Others know that I went to Sudan from the 2nd till the 8th of March. Since it is getting extremely time consuming and tiring to describe to each one of you independently what happened. I have decided to write a summary and take advantage of email and send it to all of you.

Sudan is a large country. It is the largest in Africa. And it is large enough to have 40 million inhabitants, 400 different tribes, 9 neighboring countries.

Sudan was torn for years in civil wars and unrests. The ten years civil war which ended in 1982 has left the country very poor and without basic infrastructure. Till very recently the north of Sudan was in trouble with the south, now peace is starting to ensue. But there are still problems with some tribes in the west (Darfour) but I heard that things are starting to cool down their too. I can talk about political issues but there is no time for me to summarize what is happening, you can visit your favorite news site and read about it.

I want to give a fair picture of Sudan. Although we had some trouble with the festival, this is not representative of this wonderful country. In Khartoum, the capital, mobile phones are in the hands of huge amount of people. There is also a lot of public prepaid card operated phones in the main streets of Khartoum. There are probably 6 main important streets in Khartoum that are well lit by night. There is alot of small groceries everywhere selling lots of imported goods, some made in Egypt, others illegally transported to Sudan from neighboring countries and few national products. There is one supermarket that looks like Carrefour or Tesco called Afra. There is only two multinational franchises apperant for the simple tourist; Coca-Cola and Pepsi. There are four 5 stars hotels. The suburbs of Khartoum and Omdurman are widely built mud brick houses. Other cities, like Shendi, are mostly mud brick houses except the hospital and few other governmental buildings. 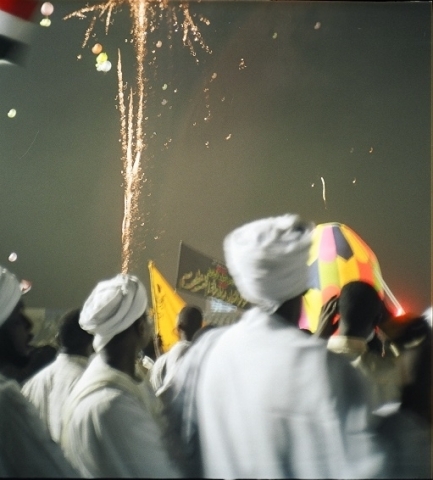 The Sudanese ministry of youth and two other organizations, organized the largest youth festival in the history of Sudan. The festival hosted 2000 youth from all of the African and Arab countries. All of the Sudanese ministries and governmental agencies worked together to ensure success of the festival. The festival was so big that 50 buses were needed to transport the participants and 2 dorms and 1 camp were needed for their accomdation.The name of that camp was Soba, named after a city in the south, this was the camp that we were first admitted to. 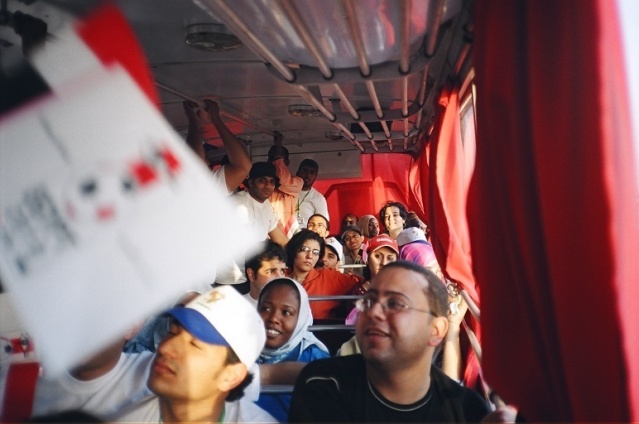 We, the participating youth from Egypt, were composed of 22 male participants and 17 female participants. All of us were aproximatly the same age group but from different backgrounds. We were to represent our countries' youth ministry.

Soba was not comfortable. 22 in a single room was definatly not comfortable. With a bathroom that needs a week to describe how primitive it was. We didn't like the conditions at all and we sort of protested. Even though we were very understanding to how Sudan was a poor country, when we knew that our group leaders will stay in a 4 stars hotel and all of the Saudi participants will also stay in a hotel. We demanded another place. And our demands were fulfilled, at 4am the second day, we were relocated to the student dorms. In the dorms things were much more comfortable. 4 persons per room and a bit less primitive bathrooms that were in the same building was fine.

What I really loved about Sudan was the extremely kind and friendly people. Not just our coordinators who were pouring with tears when we were leaving back to Cairo, but everyone on the street. They kept on calling us 'awlad el niil' or 'Sons of the Nile'. We felt very strange to be loved so much for no apperant reason, to an extent that we felt hugely indebted to the Sudanese people and I really felt how deep our friendship is.

In Sudan time does not exist. This is the first thing anyone will notice. People don't meet at certain hours but their life runs in a much simpler way. Basically the festival was organized like this; In the morning there were sessions, then lunch, then an event or break, then dinner and finally a cultural event. Very nice, but nothing happened at the same time twice all week long. This basically resulted in several troubles in organization, lots of participants either appeared so late or very early they had to wait so long. I remember that half of our trip was spent waiting, not because we were early but mostly waiting for the bus driver to wake up, or waiting for lunch or dinner to be served, or waiting for the rest of our group to gather so we can start moving and reach our destination.

It was extremely hot in the first four days. More than 40 degree Celsius in the shade. It was so hot that if the organizers were not prepared with large amount of water and refreshments their would have been serious heat stroke cases. Personally, I did suffer from headaches after being exposed to direct sunlight for several minutes. On the day we had the trip to the Nile cataract and the royal city, there was a sand-storm in the whole of middle east. Visibility on that day was not good, that was a bit disappointing. After that the weather in the last two days was very nice.

As planed in the schedual of the festival, there was a touristic visit to some of the areas in Sudan. Personally, I was dying to see the pyramids of Meroe. I saw a documentary about them produced by the Discovery Channel. So, I decided to go with the bus going there. The trip for this bus was planned to visit two places, the 6th Nile cataract then the Royal City (In which the pyramids of Meroe exists).

In our way, after several hours travelling, the bus suddenly stopped in the middle of the road, blocking it. We were asked to step down from the bus. We were perplexed but we obeyed the orders to get out from the bus in the middle of the desert. To our astonishment, we heard music outside, a large collection of Sudanese men, women and children and a sign welcoming us to the Nile River province. We were asked to shake hands in a queue with about 150 persons. With smiles on their faces and all the welcoming phrases one could imagine. It was sensational, I felt very happy and amazed by such welcoming ceremony. We got back inside the bus and continued our trip.

We took rest in a city called Shendi. We met the head of the province and we saw an exhibition of local crafts. There were some welcoming music, refreshments, food and sword dancing. We got back to the bus to start moving towards the cataract. After an hour, the buses deviated from the main road, traveled for a while in the desert. Suddenly, we were surrounded by a small village built in the arid desert behind some hills. The village is made totally from mud-brick houses and without a single green vegetation in sight. We moved through the village while people were waving to us. After a while palms, trees and small farmlands started to appear and we were asked to walk to the cataract. 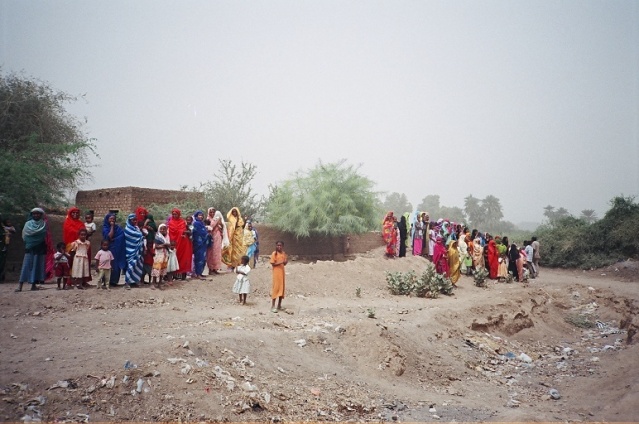 When we stepped out of the bus we found a huge celebration by the village women and children. Singing and screaming in very colorful dresses that were in sharp contrast with the landscape. 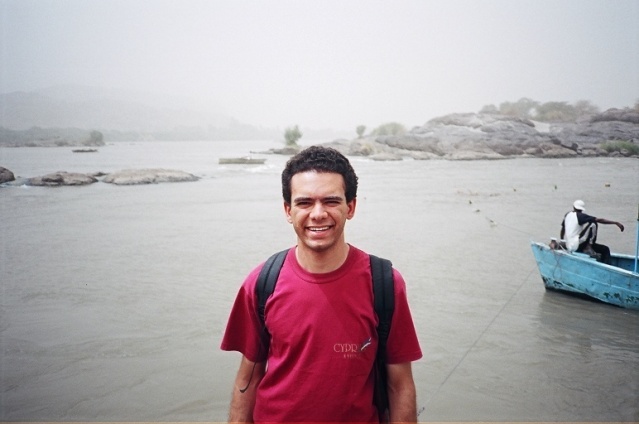 Hard to describe, this is a photo of me and the Nile cataract in the background. 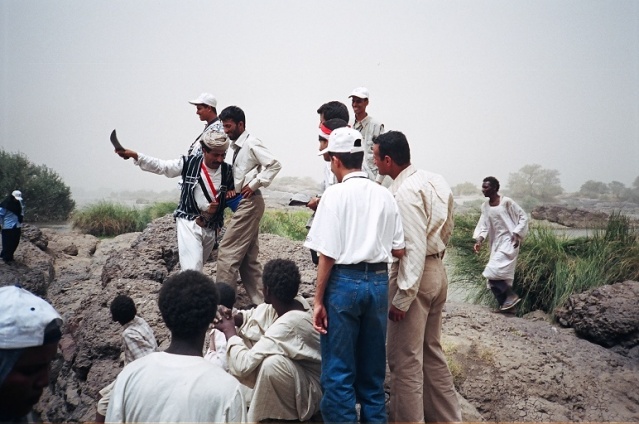 The Yemeni delegation having fun. 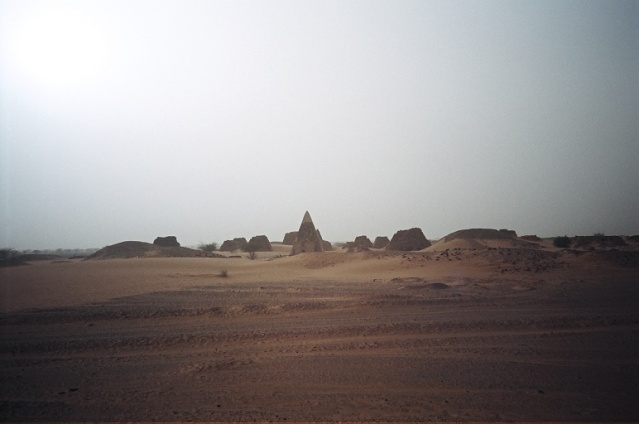 We then started moving to the Royal City, in Bakarawiya. After an hour or two, I suddenly saw some small pyramids from the bus windows. I started waking some folks with excitement. In one of the windows I noticed 3 enormous pyramids, probably half the size of the Giza pyramids. But due to the sandy weather they were barely visible. I personally thought that our bus will go to those large pyramids but instead it took a turn away from it. And went to some place else. 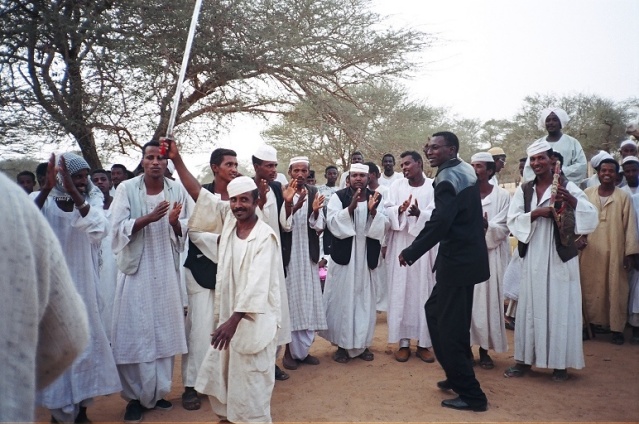 Again we were asked to get down and we were welcomed with more music, more dancing, more sword dancing, more refreshments and more food. We walked a little to see the remains of ruins of an old temple. In our way toward that temple, I noticed that I was walking on non-excavated archeological stuff. The tops of walls and separations of buried buildings were just appearing from the land we were walking upon! In our way to the temple there were several tribes dancing and singing.

Sudanese music is very nice and rich. Usually a mix between Arabic and African tunes. But at the same time quite distinctive. We were lucky to be exposed to such a large amount of Sudanese music. In every event there was a small live band singing.

In our trip back from the royal city at night. Although I was half asleep and extremely tired from the long trip and surrounded in the bus by several energetic folks singing their countries national anthems. I suddenly felt very nervous, the sand-storm was very strong and visibility in the modest highway was nil. I started to relax when I remembered that we were not alone and there was a police car and an ambulance with us. But the driver must, each time, take the extreme right of the road and get the right side of the bus outside the road to allow oncoming cars on the left to pass. I hoped that we finish the road of challenge, this is the name of the highway, safely. Afterwards, I remember that I returned back to the half asleep state till we reached our dorms in Khartoum.

The whole trip was a big trap. Well, in a sense that we didn't have the freedom to move in Khartoum. Also the dorms were far away from anything that was of value in the city. I guess this might be always the case with government sponsored youth events. And, BTW, the Egyptian Youth Ministry sucks. But in our last day we were transported to Omdurman market. We went shopping the traditional products. Stuff like crocodile and python leather products, ebony items, herbs and peanuts. 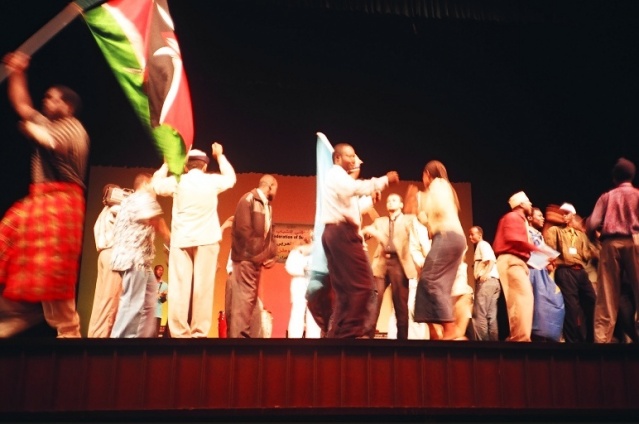 In conclusion, this trip was a mix of experiences. An eye-opener. I am still eager though to visit the south of Sudan and I even wish if I could ever visit any of the tropical African countries.