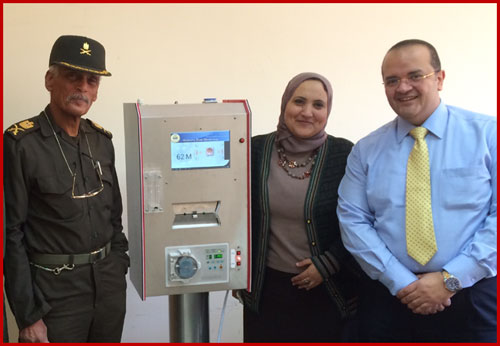 El-Youm El-Sabe3 published an update on the Egyptian military devices that detect and treat Hepatitis C and HIV. Based on a military source the newspaper conveys the following points:

Yesterday, el-Wattan newspaper published that the Engineering Authority will present the devices in an international conference. And will answer questions by both local and foreign scientists.

Last month, the Engineering Authority presented the virus detection device in a medical equipment exhibition. The device is similar to the fake bomb detector sold in Iraq. I went to see the device, proved that it's a hoax and was kicked out. I wrote about this here.

Earlier the Engineering Authority promised that it cured HIV and Hepatitis C and will make the miracle cure available by June 30. The interim president scientific advisor Essam Heggy said that both devices have no scientific merit. MIT virologist Islam Hussein published detailed videos in Arabic questioning both devices.

Major General Abdel Atty is an obvious charlatan who claims to have invented a new medical discipline called cosmic medicine. He used to peddle herbal cures in the gulf. Then out of no where became an honorary general and made these extraordinary claims.

June 30 is approaching and these devices offer nothing but false hope to thousands of patients. Despite this being an obvious and dangerous hoax there is little response from the Egyptian medical and scientific community.